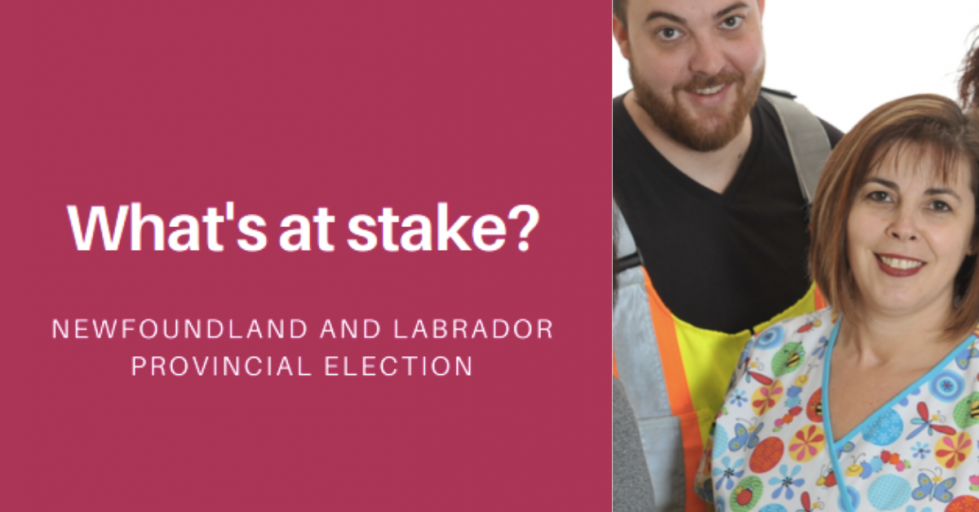 The NDP offers a better choice for the people of our province. It is a choice that puts people first. Priorities in the NDP platform include fixing healthcare staffing shortages, increasing the minimum wage to $15, closing the gender wage gap, making post-secondary education affordable, creating a regional public transit system, and democratic reform.

The platform promises to work for the people of the province by making everyday life more affordable and improving health care and seniors care. Read the NDP platform at www.nl.ndp.ca/platform.

Support your local NDP candidate by volunteering. For more information visit their website at nl.ndp.ca.

Four issues to discuss with candidates

Training and Recruitment of LPNS and PCAs

Both the Eastern and Western Health Regions are facing a shortage of qualified licensed practical nurses and personal care attendants. Because of these shortages, hospital and long-term care administrators have placed restrictions on workers’ annual leave, sick leave and other time off requirements. This situation has created unhealthy workplaces, where LPNS and PCAs are overworked and stressed. Workers are concerned about meeting the needs of patients in a timely fashion.

The province desperately needs more LPNS and PCAs. Unions are in discussions with employers about the creation of additional courses to train new LPNs and PCAs, and about improving recruitment efforts.

Ask the candidates in your district about solutions to address recruitment and training of LPNs and PCAs.

More than a third of workers earning less than $15 per hour are women aged 25 to 64. And 80% of them are not students. It’s time for bold action. A $15 minimum wage is a concrete way to help reduce growing inequality, the rise of precarious work, and help move families and individuals out of poverty.

The public has been told that higher minimum wages kill jobs, but in fact there’s growing evidence that increasing the minimum wage helps create good jobs. Also, increases in the minimum wage put more money in the pockets of working people, that will be spent in the local economy.

Ask the candidates in your district to support a $15 minimum wage.

Public-private partnerships waste scarce public dollars and turn over ownership and control of our health facilities to private for-profit companies. The Ball Government is now using seven P3 deals to build our public infrastructure, while providing sweet deals to consultants, corporate executives and private investors. We need to stop the drain on our finances.

There should be no secrets when public money is spent on public infrastructure and services. We have the right to know.

Ask the candidates in your district to stop the use of wasteful and secretive P3 deals.

The Newfoundland and Labrador government should implement policies and legislation to make appointments to agencies, boards and commissions more inclusive.

Selection and hiring practices should remove barriers and support under-represented populations, such as Indigenous peoples, women, persons with disabilities, LGBTQ2+ and racialized groups.

Ask the candidates in your district what measures they support to make the province’s agencies, boards and commissions more inclusive.

To All Newfoundlanders and Labradorians:

I believe Dwight Ball’s Liberal government is not listening to Newfoundlanders and Labradorians.

Time and again, the choices made by the Ball government have been out of touch with the needs of workers, their families and our communities.

The Ball government deserves to be defeated.

On Thursday, May 16 you have the opportunity to vote for progressive NDP candidates who will stand up for working people and their families.

Let’s elect a new government that works for all of us!

Get a copy of this flyer 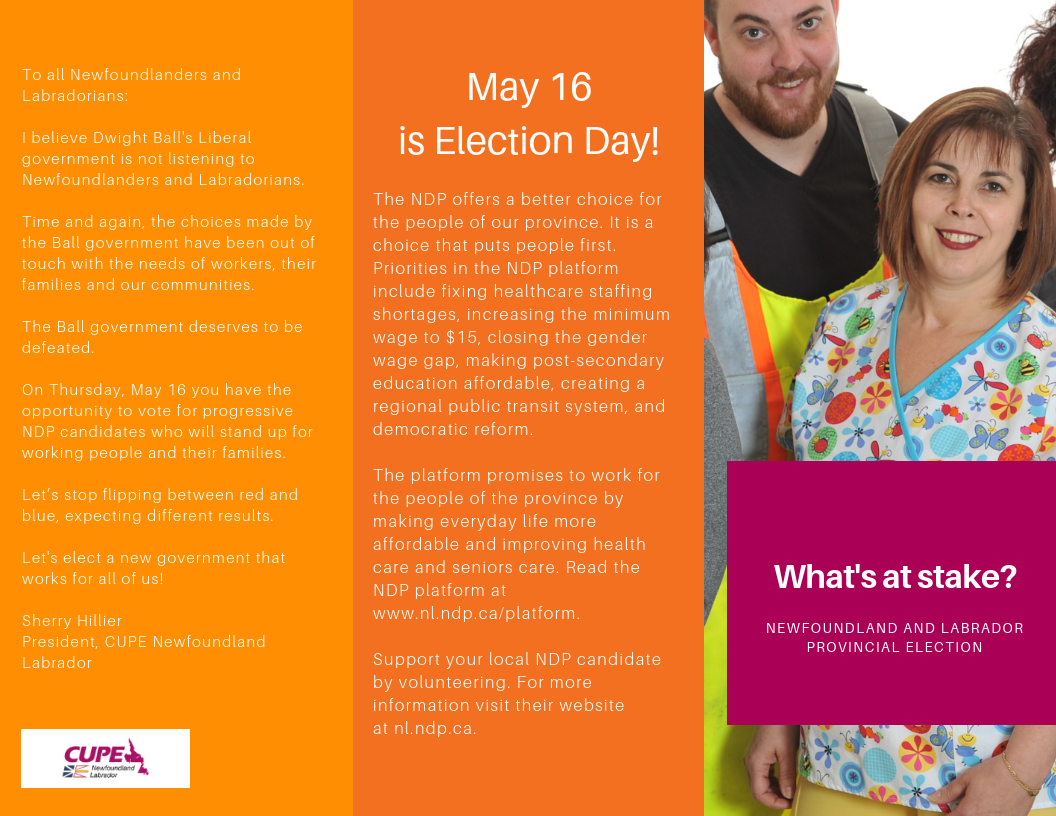 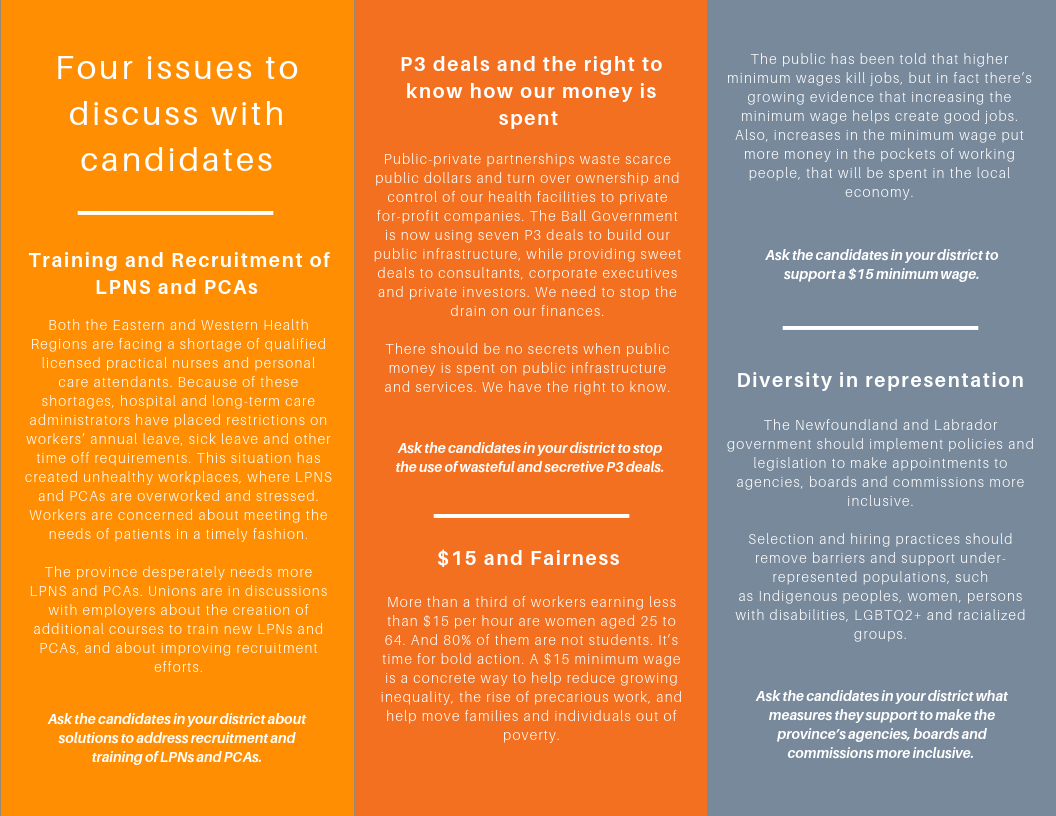