CUPE advocates for workers who deliver the public services people depend on. Our members work in hospitals, schools, municipalities, and many other public spaces.

We help our members provide the highest level of service by ensuring they are safe and healthy at work, and that they get fair pay and benefits for the services they provide.

We also advocate for better public services, like improvements to public health care and to the Canada Pension Plan, that would improve our communities and the lives all Canadians.

After declining for many years, support for unions has rebounded since the financial crisis. A growing number of Canadians also say they’d like to join a union. These are some of the reasons why:

1. Higher wages. On average unionized workers are paid $5.40 an hour or 23 per cent more than those who aren’t members of a union. The union advantage is considerably higher for women and lower paid occupations.

Together we maintain and improve wages and benefits, improve health and safety conditions, and make your workplace better.

5. Health and safety. Unionized workplaces tend to be safer, with studies for the construction industry showing 30 per cent lower critical injury claims, 17 per cent fewer mobility impairments and 23 per cent lower lost-time claims. Unionized workers are more likely to report health and safety violations and minor no-lost time injuries (due to training, awareness and/or less fear of reprisal), which makes workplaces safer overall.

8. Transparency and equitable due process. Wages are set by common wage scales and grievance and arbitration procedures provide for due process over disputes.

9. Workplace democracy. Unions provide democratic organizations through which workers can affect change in their workplaces, communities and in the wider world.

10. Advocacy and political action. Unions have paved the way in improving conditions for all workers, levelling the playing field so that non-union employers have to compete with them to attract workers. 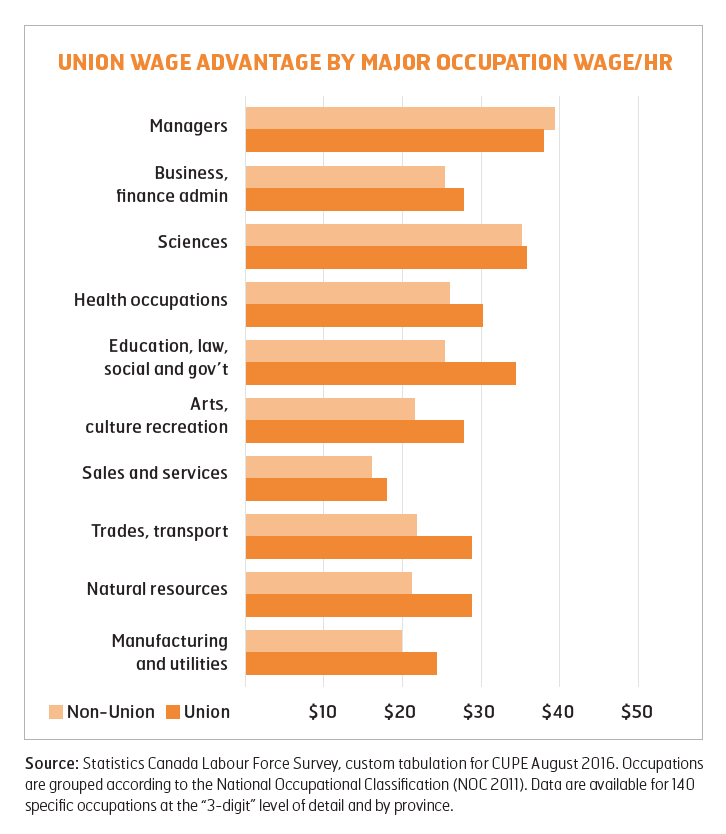