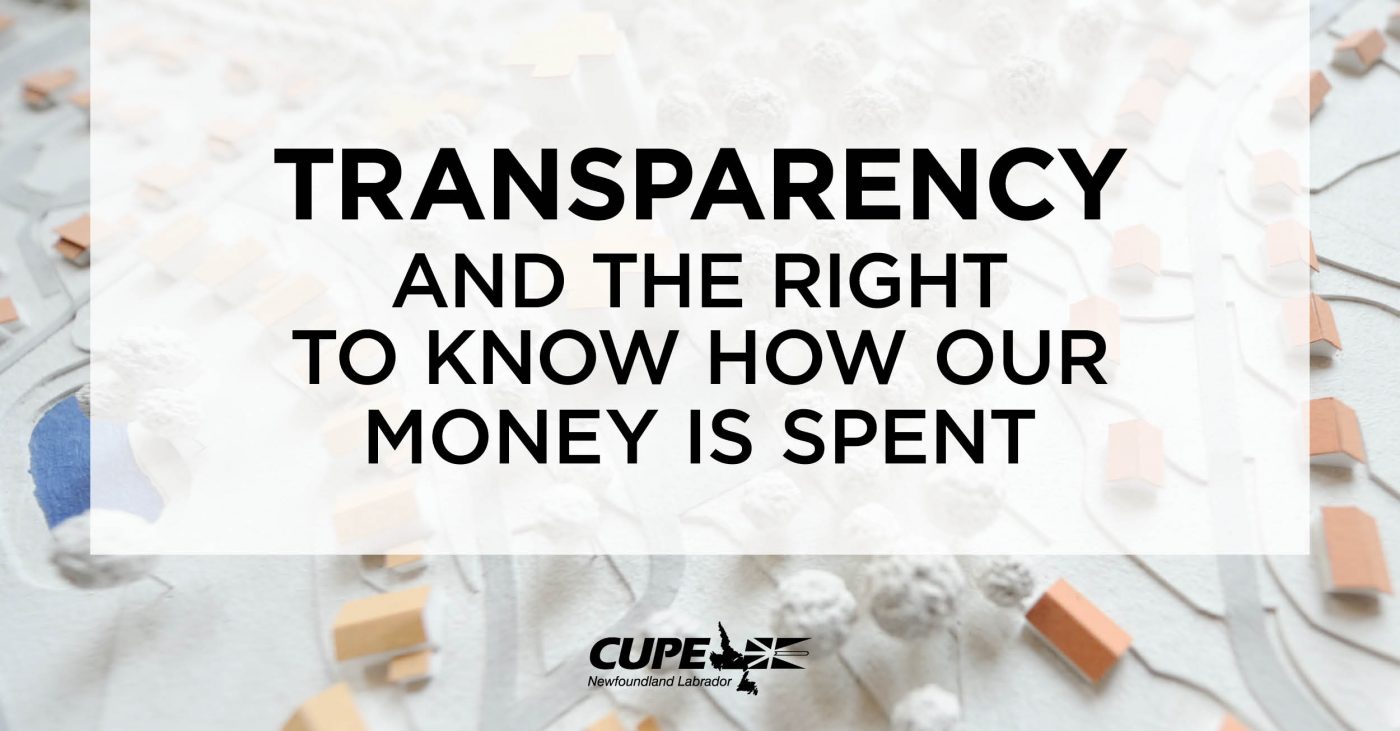 Welcome to CUPE Newfoundland and Labrador’s call to establish transparency in disclosure and reporting of public-private partnerships (P3) contracts through legislation.

For too long, P3 contracts have been a black hole for accountability and transparency, with generally negligible disclosure by the provincial government. Meanwhile, the use of P3 deals has accelerated while providing sweet deals to corporations and private investors.

We need to stop the drain on our finances and one of the first steps we can take is to legislate disclosure and reporting of how our money is spent in P3 deals. There should be no secrets when public money is spent on public infrastructure and services. We have the right to know.

Send your MHA a message: Tell them we have the right to know how our money is spent

We’ve paid a high price by not keeping an eye on the details in P3 contracts, most recently when the 20-year old deals for the construction of 39 schools in Nova Scotia was made public. The province recently bought back the leases for 37 of the schools. The alternative was to walk away empty handed, while developers pocket the money spent over the years and keep the buildings. The province spent nearly $1 billion dollars, including lease buy-outs, principal and interest payments. Nova Scotians lost hundreds of thousands of dollars – if not millions.

Think of all the public services we could have today with that much lost revenue – hospitals, doctors, long-term care beds, teachers, child care, mental health services, and more kilometres of safe highways.

Up until 2017, Newfoundland and Labrador was the only province that had resisted public-private partnerships. Now, the Liberal government has entered into P3 deals for a long-term care home and regional hospital. CUPE representatives met with the Minister of Finance and the Minister of Transportation and Works in March 2017 to discuss the dangers of using P3 deals to build infrastructure. The union requested that the department disclose all analysis to the public. Finance and Transportation and Works representatives made a commitment to publicly release the fully detailed business case, with all the appendices and numbers, in the fall when they are ready to award the contract. However, the full details were never publicly disclosed. Without transparency in disclosure and reporting we may not know the real cost for decades.

Discussion guide: Transparency and the right to know how our money is spent

It is essential that legislators, policy- makers and members of the public know more to gain better knowledge of our existing and future fiscal state, but also to better inform and influence our current public policy-making.

“Debt bombs” are being created by P3 projects whose costs are largely hidden up front. These deals are usually locked in for 20 to 30 years. Decades later, Newfoundlanders and Labradorians discover the size of these debts, reducing the revenue we need for valuable public services.

In Newfoundland and Labrador, we have no way of knowing the magnitude of P3 liabilities and long-term obligations. What are Newfoundlanders and Labradorians on the hook for? How much debt are we carrying from P3 deals? It’s almost impossible to know since we do not have access to the information contained in the contracts – negotiated through secret backroom deals.

We also have no knowledge of the much larger obligations associated with P3s, such as the cost of buying back leases or the operations and maintenance costs that have also been handed over to these private companies.

Canada has one of the most active and largest markets in the world for P3 projects, but we also have one of the weakest legislative, accountability and transparency regimes for P3s in the world.

Bias and influence-peddling must be reduced. Legislation should put a requirement on consultants and decision-makers to prove that the option they support, whether public or private, is in fact in the public interest.

Reporting standards also need to apply to other operational arrangements for delivering public services beyond these more strictly-defined as P3s. For example, the growing interest in and use of social impact bonds and private financing for public infrastructure through the Canada Infrastructure Bank. This will create additional obligations and liabilities that should be adequately reflected in public sector financial statements.

CUPE opposes public-private partnerships and believes that we can count on public services to be accountable, accessible, locally-controlled and a wise investment of tax dollars. Privatization is risky and expensive for provinces and citizens. Costs rise, quality suffers, and local control is weakened. Public funds are diverted from core services to corporate profits.

CUPE strongly supports more detailed and comprehensive disclosure and reporting requirements both in general and in relation to public-private partnerships. We also strongly support the requirement that operating and maintenance payments, as well as any other payments, or minimum revenue guarantees, also be required to be itemized.

We note that the International Public Sector Accounting Standards include significant disclosure obligations and hope that Newfoundland and Labrador’s public sector accounting at least meets these standards. While these accounting principles apply to financial decisions that have already been taken, we would also like to see them applied to the business case development upon which the decision is made whether to opt for a P3 or traditional procurement. This would ensure decision-makers and the public receive relevant information in a timely manner to ensure greater accountability and transparency in the development of public infrastructure.

It makes sense to recognize the value of engaging the provincial auditor general in the review of contracts for public infrastructure and services. Legislation should require that the auditor general be granted complete access to information and adequate resources to analyze and report back on each project.

What is Open Contracting?
Right to Know Coalition of Nova Scotia. June 2018.
nsrighttoknow.ca/wp-content/uploads/2018/06/Open-Contracting.pdf

To P3 or Not to P3: That is the Question (Part II)
Mary Campbell. Cape Breton Spectator. October 2018.
https://capebretonspectator.com/2018/10/10/p3-qeii-ns-mcneil-health-research

The Costs of Secrecy: Economic Arguments for Transparency in Public Procurement
Michael Karanicolas. May 2018.
https://www.opengovpartnership.org/sites/default/files/OGP_Costs-of-Secrecy_20180515.pdf

Nova Scotia Public Procurement Act
Including policies and processes, and list of entities covered under the Act.
https://novascotia.ca/tenders/policies-processes/public-procurement-act.aspx

Government of Canada, Guidelines on the Proactive Disclosure of Contracts
http://www.tbs-sct.gc.ca/pol/doc-eng.aspx?id=14676

KPMG: Reasons to be skeptical of the advice they offer
Jim Silver. Canadian Centre for Policy Alternatives (CCPA). November 2017.
https://www.policyalternatives.ca/publications/commentary/kpmg-reasons-be-skeptical-advice-they-offer