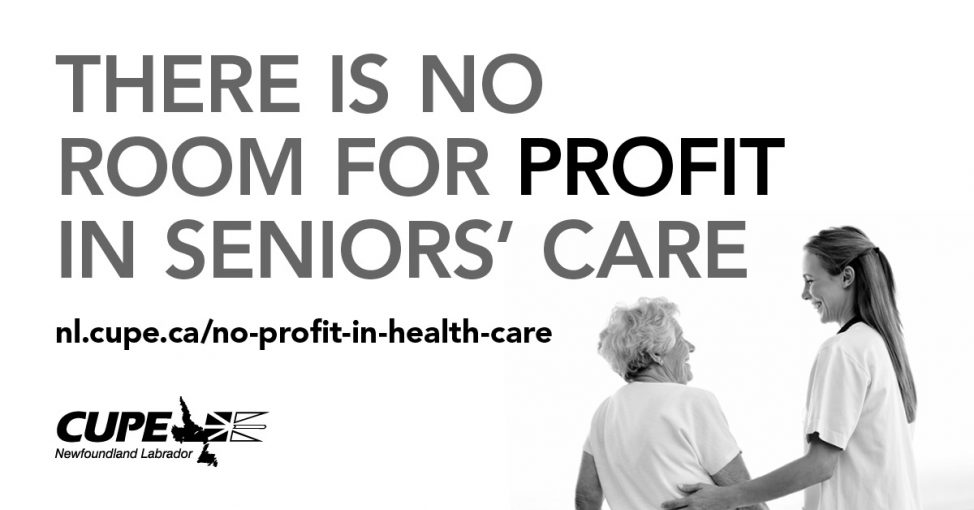 Tell the Ball Government to keep their promise not to privatize our public health care system.

The P3 deals that the Ball Government wants to use to build Corner Brook health care facilities are a Trojan Horse that will allow the quality of our public health care to be influenced by private interests and profit margins.

Please urge the Ball Government to take the following action:

Make public the full details of the Corner Brook value-for-money report and business case – before final decisions are made and any contracts are signed.

In addition, the Province should mandate:

We are going to pay for these projects one way or another. We might as well build our health care facilities publicly.

Let’s own and control them ourselves, for the public interest and not for private profits.


Up until now, we were the only province that has resisted public- private partnerships. Now, the Liberal government has plans for two P3s in Corner Brook — a long-term care home and a new regional hospital.

The government is presenting its P3 plan as if it’s a gift to the people of Newfoundland and Labrador. It’s not!

Unfortunately, P3 projects have a track record of going well over budget and delivering less than what was promised. Because they wind up costing more than publicly-built facilities, they usually result in cuts to jobs and services. They look good outside the city gates but upon examination they contain lots of hidden pitfalls—a false gift to the people of Newfoundland and Labrador!

The Trojan Horse was a ploy used by the Greeks to enter the city of Troy during the Trojan War. After 10 years of siege, the Greeks constructed a hollow wooden horse and hid men inside. They left the horse outside the gates of Troy as an offering to Athena and pretended to sail away, tricking the Trojans into pulling the horse inside. That night the armed men crept out of the horse and opened the gates for the rest of their army, which had sailed back during the night. The Greeks then destroyed the city of Troy, ending the war.

Here are some of the main concerns with P3s:

So why would any provincial government rely on P3s with higher-cost private financing?

There’s a desire by many politicians to keep borrowing costs off their books, at least in the short term. There is also pressure from the P3 and finance industry which want to gain higher rates of return from investing in public infrastructure or privatized public assets.

Download a copy of the handout: P3s – the Trojan Horse of health care