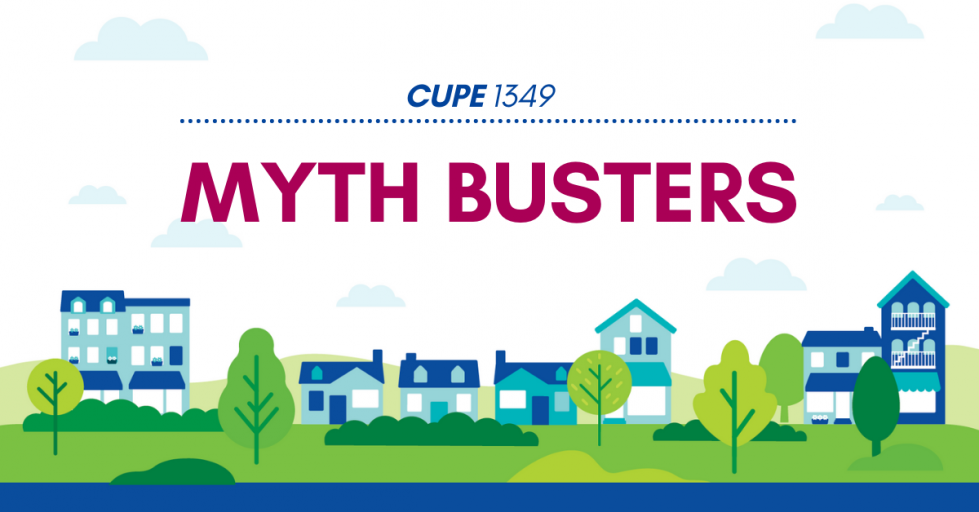 Municipal employees at the Town of Grand Falls-Windsor have been locked out by their employer since July 14, 2021.

Prior to the forced work stoppage, members of CUPE Local 1349 unanimously rejected the Town’s final offer, and 99 per cent of members voted for job action. The Town’s final offer was aimed at stripping hard-won protections and rights from the collective agreement.

CUPE is committed to safe, harmonious working conditions, and will not accept concessions.

MYTH: The impasse is about money.

FACT: While the issue of wages is on the table, it is not the factor leading to this impasse. Employees are looking to maintain their collective bargaining rights and their medical plan, and they want to be treated with respect by their employer.

MYTH:The Union is unwilling to work with the Town on the health benefits plan.

FACT: We don’t have any concern with the Town going to market to seek savings on the benefits plan, provided the current level of benefits is maintained. We are not opposed to participating on a committee regarding the benefits, but we aren’t prepared to have the Town make arbitrary decisions regarding the plan.

MYTH: The Town says it pays the full cost of the benefits plan and that the union does not contribute.

FACT: In a previous round of bargaining the employees agreed to give up a significant wage increase so that money could be funnelled into the benefits plan. By giving up their raise, the employees have contributed to the plan for many years. Seasonal employees pay 100 percent of their own benefits while they are off and this is not something we are trying to change.

MYTH: The president and bargaining committee are misleading their members and the members have no idea why they are out.

FACT: Members were presented with a copy of the agreed items and the town’s final offer for review and vote. The fact that we had 100% rejection speaks volumes to the effect this new contract would have on our workplace.

MYTH: The union will be responsible for an increase in taxpayer dollars.

FACT: Over the last number of years the unionized workforce has decreased by two positions which has led to a savings of taxpayer dollars. During this same period, management has increased by four positions leading to an increased burden on the taxpayer.

MYTH: The Union is trying to control how the Town hires employees and manages jobs.

FACT: The Union wants to protect provisions in the contract that prevent contracting out of the public services we all depend on. We are trying to protect new hires, casuals and seasonal workers from unfair practices. And we are asking the Town to complete the job evaluation process that it started, using tools that assess jobs in an unbiased, consistent manner.

FACT: Our collective agreement does not interfere with managerial rights with regards to job descriptions or job postings, etc. It contains the same rights as many other agreements between Towns and their employees. The Town wants to remove a dispute mechanism that allows the Union to challenge managerial decisions that could lead to an unfair work environment. These dispute mechanisms have worked in our contract for over 30 years.

MYTH: The mayor says our collective agreement is among the best in the province.