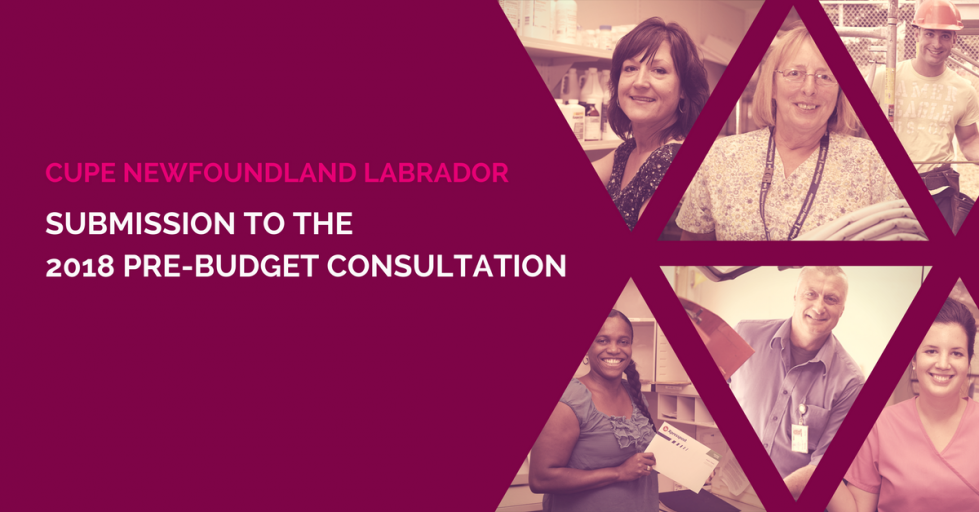 CUPE NL supports the position taken by the Common Front NL in urging government to focus on protecting existing jobs in the public and private sectors and invest to stimulate economic growth in the short term.

The real crisis facing the province is not how to balance the books but how to stop rising unemployment. Yes, the deficit needs to be addressed but government’s own forecast is for a balanced budget by 2022.

RBC economists warn Newfoundlanders and Labradoreans face “grim job prospects”. “We see little to stem employment losses in the next two years as the provincial government slims down in efforts to eliminate its deficit, consumers cut back spending, and work on the giant Muskrat Falls project ends in 2019.”

The unemployment rate in Newfoundland Labrador is “officially” 14.5%, more than twice the Canadian average. The real rate – counting people who are involuntarily working part-time, waiting for jobs, or have given up looking – is more than 18%.

1. Stimulate economic growth by investing to reduce inequality, and
2. Reduce expenditures and create efficiencies by cancelling the P3 deals

Statistics Canada reports that the gap between the highest salaries and the lowest incomes in St. John’s is the highest of the Atlantic Canadian census metropolitan areas. (See Figure 1.) The top one percent take home nearly nine times more than the bottom 30 per cent, and nearly seven times more than the bottom 50 per cent. The next largest gap is in Gander, then Halifax, followed by Bay Roberts. 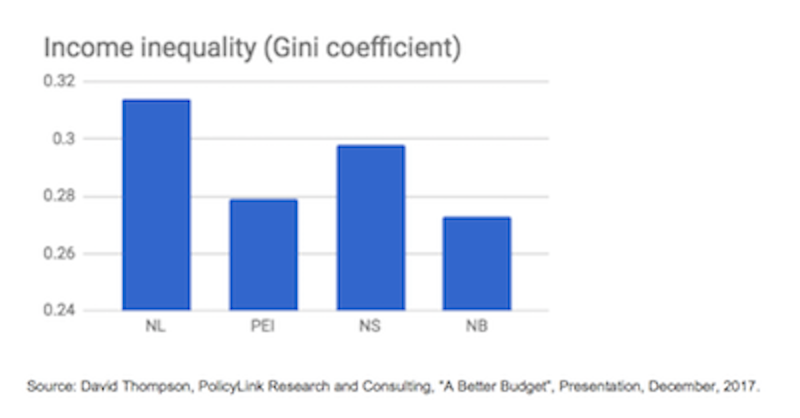 “We definitely should be concerned about it,” says economist Tony Fang who holds the Stephen Jarislowsky Chair in Cultural and Economic Transformation at Memorial University. The incomes of the bottom 30 per cent of people across Newfoundland Labrador are around $20,000 or less a year in a province with the highest cost of living in the Atlantic region.

Fang expects the income inequality in the province to keep growing, and that it will become “a significant social issue.”

There is mounting evidence of a causal relationship between inequality and poor health. Healthcare costs have been identified by the Government of Newfoundland

Labrador as one of the province’s significant costs. Government’s focus seems to be on finding ways to cut spending but CUPE suggests investing in public services instead.

A recent study published in the Canadian Medical Association Journal (CMAJ) concluded that focusing on the social determinants of health such as income and housing can help address the root causes of disease, poor health and premature death.

Spending on social services is an effective way to improve the overall health of the population. Those with the lowest incomes (and consequently the lowest life expectancies) would benefit the most in improved health.

One way to create efficiencies in public services is to increase investments in social services like income supports and housing that will, in turn, lower health care costs.

Inequality should not only be reduced to improve social outcomes, such as good health, but also to sustain long-term growth.

Econometric analysis by the OCED suggests that income inequality has a negative and statistically significant impact on subsequent growth. This work finds that countries where income inequality is decreasing grow faster than those with rising inequality.

The impact of inequality on growth stems from the gap between the bottom 40 percent with the rest of society, not just the poorest 10 percent. Anti-poverty programs will not be enough, says the OECD. Cash transfers and increasing access to public services, such as high-quality education, training and healthcare, are an essential social investment to create greater equality of opportunities in the long run.

To tackle inequality, the OECD suggests a focus on increasing women’s economic participation, promotion of employment and creation of good-quality jobs, investing in human capital through better skills and education policies, and, finally, redistribution through taxes and transfers.

These policies are especially important for rural communities who have borne the brunt of deindustrialization and declines in resource-extraction industries. Often public services like schools, hospitals, and long-term care facilities are the best jobs in small communities. By extension the job security and health and welfare benefits afforded to unionized employees at these public facilities, most often women, keep families and communities together and healthy. These public sector services and jobs also sustain private sector businesses.

Tax policy of recent governments has contributed to increased inequality.

Newfoundland Labrador’s personal income tax system has become less progressive since 2008 because of a series of tax cuts. (See Figure 2.) 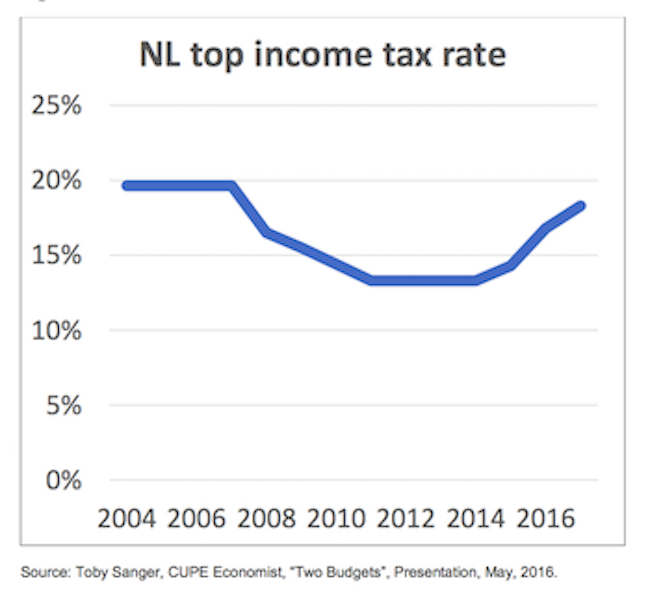 The bulk of those income tax cuts went to the wealthy. Even with recent increases to personal income taxes, the rate for top incomes is still below the rates that were effective up until 2007. 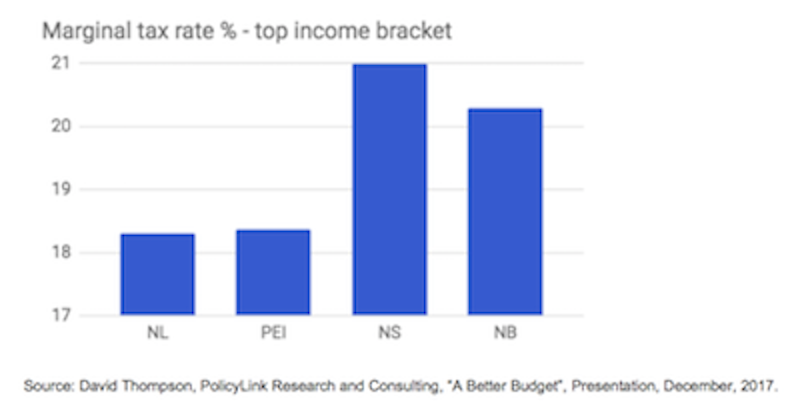 Government can reduce inequality by making the income tax system a more progressive one.

A $15 minimum wage would significantly boost the income of low-wage workers as a group, reduce working poverty and make a dent in the large increase in income inequality. Although $15 an hour is not a living wage, it is a step in the right direction.

Increasing the minimum wage is also a stimulus to the local economy because low-income earners spend most of their income and chiefly in their community.

Two recent events add to the evidence that P3s are an expensive and risky procurement model that governments and taxpayers should avoid. They should be of particular concern to this government which has announced the province’s first P3 projects, including a hospital and three long term care homes.

The Auditor General identified five key problems with the maintenance of the 16 privatized P3 (“public private partnership”) hospitals in Ontario:

Here are examples of two disputes from the Auditor General’s Report:

Despite problems such as this, the Auditor General found that P3 companies with poor performance records were still winning contracts – one such company got in on a P3 deal worth $1.3 billion in 2016 and another worth $685 million in 2017. There seemed to be an absolute disconnect between the arm of government awarding the P3 contracts, Infrastructure Ontario, and the Ministries of government managing disputes with the private-sector companies during the maintenance phase of existing P3 projects. As a result, private-sector companies in the consortia that have performed poorly in maintaining buildings—in that they have had many failures and disputes with hospitals and other government entities—have been members of other consortia that have been awarded additional P3 contracts.

This Auditor General report deals with only one (small) aspect of the P3 deals – maintenance. Earlier AG reports have shown major problems with other aspects of the P3 model of procurement.

The second recent P3 development is the collapse of Carillion, a global promoter of public-private partnerships. Carillion sponsored and financed more than 60 P3s as well as holding contracts for facilities management services. In the UK alone, Carillion held contracts to provide food and cleaning services to schools, maintenance and facility management services to hospitals, services in prisons and military bases, among others.

Carillion is involved in 10 P3s across Canada, primarily in Ontario, Saskatchewan and the Northwest Territories. Two hospitals are still in development.

The Government of Newfoundland Labrador relied heavily on the Saskatchewan experience to design and promote its P3 procurement projects. With the Carillion bankruptcy, Saskatchewan may be left with unanticipated 30-year contract obligations for the construction and maintenance of the new North Battleford P3 hospital in which Carillion was a consortium partner. The North Battleford hospital has already been criticized for its costly maintenance contract which was higher than the maintenance budget for the entire former health region.

A second cautionary tale from the Carillion collapse is the role that large accountancy companies such as KPMG, EY, Deloitte, PricewaterhouseCoopers play in the P3 business. In Britain, KPMG is under investigation by the Financial Reporting Council (FRC) for potential breach of the ethical and technical standards for auditors as the House of Commons attempts to grapple with Carillion’s massive debts and pension deficits. There are calls for scrutiny of all of the accountancy firms who have become deeply embedded in the lucrative P3 promotion and revenue streams.

All the large accounting firms that advise governments on P3 proposals – KPMG, Deloitte, EY and PricewaterhouseCoopers – are sponsoring members of the Canadian Council for Public Private Partnerships, the leading lobbying organization for the P3 industry with an explicit mandate to promote and facilitate public-private partnerships.

The Government of Newfoundland Labrador has for all intents and purposes hired EY to manage its P3 contracts. The consultants and accounting firms that prepare the business cases and assessments for the P3 agencies generate considerable income from P3s. How is it possible for EY to provide an independent and impartial assessment of P3 proposals when its ties to the P3 industry run so deep?

Higher unemployment and growing inequality threaten the future of Newfoundland Labrador as do P3s which transfer huge costs and risks to future generations.

Download a printable copy of the submission (with sources).