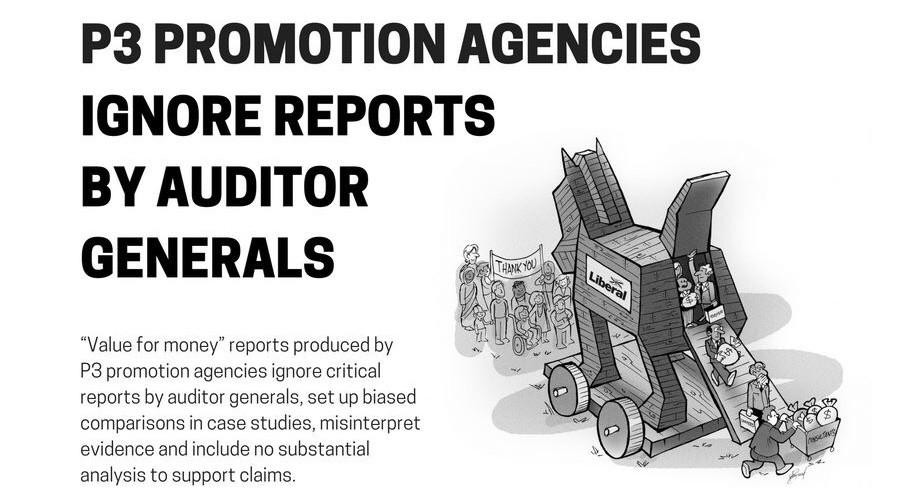 The following letter to the editor was published on Monday, November 5, 2017, in The Telegram.

The St. John’s Board of Trade offered nothing new in their Oct. 27 letter to the editor (“P3 model unduly criticized”) that hasn’t already been said by consultants and lobbyists that stand to profit from these misguided deals. 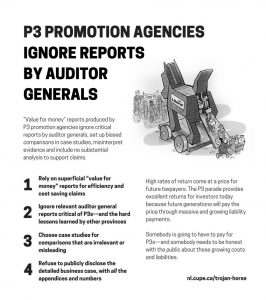 When public-private partnerships (P3) promoters use buzzwords like “innovation” and “stability” while talking about P3s, it means they’ve drunk the Kool-Aid. Privatization can take many forms, and its promoters often use different terms to hide what they’re doing.

The term “partnership” can be misleading. Board of Trade chair Dorothy Keating said it herself. “The Canadian P3 market is attractive to investors.” Their goal is not to save taxpayers money. It’s profit.

P3s are long-term contracts that allow for-profit enterprises to finance, build, own, maintain and/or operate a public infrastructure asset and the services it provides. P3s are structured to guarantee the private sector profitable payments and/or user fees, while governments are left holding the risk.

P3s allow politicians to keep upfront costs off the books and let private companies arrange financing until the project is complete. Politicians get credit for delivering new infrastructure while passing future operating and maintenance costs off onto future politicians and taxpayers.

The value for money that Keating mentioned is often calculated by using biased comparisons in case studies, cherry-picking data and ignoring reports by auditor generals.

High rates of return come at a price for future taxpayers. The P3 parade provides excellent returns for investors today because future generations will pay the price through massive and growing liability payments.

Newfoundlanders and Labradorians should take pride in the fact we’re the only province that hasn’t drunk the Kool-Aid – yet.

Update: After this letter was written, Premier Dwight Ball awarded a P3 contract to a consortium of private companies to design, build, finance and maintain a long-term care facility in Corner Brook (Friday, November 3, 2017).