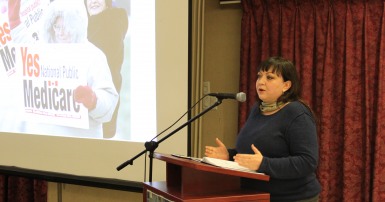 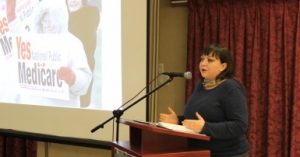 Participants at a town hall meeting in Corner Brook, NL were clear their community needs a new hospital and expanded seniors’ care – but that it must stay public.

The forum focused on the Ball government’s proposal to privatize a long-term care facility and hospital in Corner Brook by using a public-private partnership (P3). Plans are in the early stages, and speakers emphasized it’s not too late to keep the facilities fully public.

“The people of Corner Brook have been advocating for a new hospital for well over 20 years. They need it, they deserve it, and they should have it,” said CUPE Newfoundland and Labrador President Wayne Lucas.

“The only question is: do we build a hospital and a long-term care home the way we’ve always done it, publicly? Or do we use a risky P3 that kicks the costs down the road 20 years or more?” 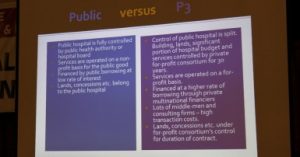 “You’re going to borrow the money either way. Why not borrow it the cheapest way, at the best interest rate?”

Expensive P3 deals put pressure on health care budgets, and “the impact on services is dramatic,” said Mehra. Ontario P3 hospitals have been scaled back in size, beds and staff are being cut once facilities open, and multiple community hospitals are being closed and replaced with one central, privatized, hospital. 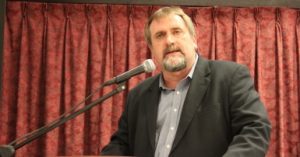 P3 health facilities are bad public policy, said CUPE National President Mark Hancock. “From my home province of British Columbia, to the United Kingdom, everywhere you look, you’ll find overwhelming evidence to show P3s are failing the public interest. They’re over budget, and under-delivering for the people who paid for them – all of us,” he said.

“The bottom line is you don’t want to invite these consultants and multinational corporations into the centre of your health care system,” said Mehra. “They have an interest in maximizing their profits, and that will always take money away from the scope of services available – whether it’s for public health care, or public transportation, education or water.”

“Working together, CUPE members and residents of Corner Brook can protect seniors and patients and keep their facilities public,” said Mehra. “You can stop this, because it hasn’t started here.”

Lucas said CUPE plans to take the issue to the streets, to doorsteps in the community, and to the offices of MHAs. “We’re committed to have an army of activists out there. Corner Brook deserves no less than a brand-new hospital and great long-term care. We intend to push this government back.”