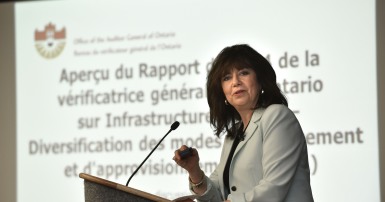 Over the years, provincial auditors across the country have questioned the financial rationale for using public-private partnerships (P3s) to build public infrastructure.

Provincial auditors are independent officers of legislative assemblies who review government finances and decision-making to ensure public funds are spent in an efficient and accountable manner.

A number of P3s have now been reviewed by provincial and federal auditors and the verdict is bad.

Auditors have found that P3s cost more than traditional public projects, use questionable methodology, lack accountability and do not transfer risk to the private sector. 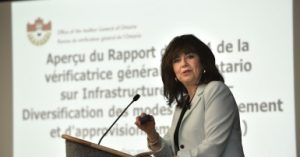 In her 2014 Report, Ontario’s Auditor General reviewed 74 P3 projects and concluded that they cost the province $8 billion more than if they had been procured publicly. The majority of this— $6.5 billion—was due to higher private-sector financing costs. She also questioned the main justification for using P3s–the assertion that they transferred risk to the private sector. The P3 projects used unrealistically high risk transfer, averaging about 50% of the capital costs.

The Auditor General concluded that “there is no empirical data supporting the key assumptions used by Infrastructure Ontario to assign costs to specific risks.”

In her follow-up audit of the P3 projects, the Auditor General noted that little to no progress had been made on a number of audit recommendations. Further work was required on:

The Auditor General also highlighted the $36.6 billion in long-term P3 liabilities and commitments that the present and future governments will face.

In 2008, Ontario’s previous auditor general determined that the William Osler Centre, a P3 hospital in Brampton, could have been built for $200 million less through traditional public financing. He also found that the cost of the public option was overstated by more than $600 million and that there was a high cost for advisors and consultants ($34 million).

In 2014, the Auditor General of British Columbia raised major concerns about the high cost of debt through P3 projects. She examined 16 different P3 projects in the province and found the government was paying nearly twice as much for borrowing through P3s as it would have if it had borrowed the money itself.

An earlier 2011 review of the Vancouver General Hospital Academic Ambulatory Care Centre (AACC), known as the Gordon and Leslie Diamond Health Centre, identified the higher cost of private financing, probed the transfer of risk to the private sector and questioned whether P3s were in reality on time and on budget.

In 2010, the provincial auditor of Quebec found that the McGill University Health Care Centre (MUHC) P3 cost more than the public option, and that the analysis used to compare the P3 model to a conventional public model was extremely faulty. Instead of the P3 model saving $33 million, the provincial auditor found that the public model would have saved $10 million. The auditor’s special report to the National Assembly also found that there was a cost overrun of more than $108 million, on top of the original price tag of $5.2 billion.

Not only that, a number of the key people involved in the McGill University hospital P3, such as Arthur Porter and the former CEO of SNC Lavalin, have been charged with corruption associated with this project.

Recently two researchers from Montreal calculated that the government of Quebec would save up to $4 billion if it bought back the two super hospitals from the P3 consortium.

In 2010, the Auditor General of Nova Scotia reported on his review of 39 P3 schools in that province. He cited numerous and significant problems with the administration of contracts, notably the absence of a child abuse registry and criminal records checks of sub-contractors. Many of the P3 companies subcontracted work to other companies without ensuring adequate safety checks.

The auditor concluded that “[t]he terms of service contracts are not adequate to ensure public interest is protected…The lack of these significant contract terms impairs the Department’s ability to hold the developers accountable and effectively manage the contracts.”

He also noted that risk was transferred back to government and developers were being paid twice for the service, resulting in a deficit for any local school board.

In her 2012 report, the New Brunswick Auditor General found significant problems with the decision to build two P3 schools in Moncton and Rexton. She pointed to deficiencies in the value for money analysis used and reported that the decision to use a P3 had been made without any rationale. In fact, she found that the government spent $1.7 million more with a P3 than it would have using public procurement.

The Department of Finance had claimed that the P3s would provide seven to 15 per cent savings on the design and construction, that capital financing to the private partner was very close to the government’s long term borrowing rate, and that major capital repair and replacement risk would be eliminated. None of these claims proved true.

The Auditor General concluded that the capital cost of the Evergreen School would have been $774,576 less had the province done the work itself and that the Youth Facility cost the Province $700,000 more because of higher financing costs through the private corporation Wackenhut.

In 1995, the Auditor General of Canada reviewed the Confederation Bridge P3 project, which is often listed as a success story by P3 proponents. The Auditor General had major concerns with the “complex financing” of the project and concluded that the bridge cost $45 million more than if the government had directly borrowed the money.

In a 2015 review of SaskBuilds, the provincial Crown corporation responsible for P3s, the Auditor General of Saskatchewan found that the corporation had valued the risk of public procurement to be six times higher than if it had used P3s. The Auditor General noted that benefits attributed to P3s could also occur in public sector procurement and urged the government to gain efficiencies under traditional procurement.

In 2010, the Ministry of Health signed a Memorandum of Understanding with Amicus Health Care Incorporated to build a 100-bed long term care facility in Saskatoon, without prior agreement from the health region. Although neither the government nor the provincial auditor called this arrangement a P3, it was by all definitions a P3: Amicus financed 100% of the capital costs and receives monthly capital and operating lease payments from the province over seven years.

The Provincial Auditor criticized the absence of a cost benefit analysis:

The proposed daily capital rate is higher than other affiliates [nursing homes] because of Amicus borrowing 100% of the capital required for construction. We were unable to obtain the basis for calculating this rate for Amicus. As well, neither the [Ministry of] Health nor Saskatoon [Health Region] could provide us any written analysis to support that funding long-term beds in this new way is cost effective for the Province.

The Auditor also noted that once the construction was completed, the Saskatoon Health Region “assumes the risk over debt repayment and the operation of the new facility.”

Dr. John Loxley also reviewed what little information was disclosed about the Amicus deal and concluded that private financing would cost $11 to $20 million more than if the province had built the facility.